The Natural Resources Conservation Service field office in Burke County, N.D., has had some good luck halting the spread of saline areas in cropland.

Burke County has about 425,000 acres of cropland. Nearly every quarter of ground has some sort of saline problem; sometimes it covers as much as 20% of a field, says Mark Crosby, NRCS district conservationist.
Salt that has been carried to the soil surface by rising water tables can significantly reduce grain yields and, in many cases, will kill everything but kochia and foxtail barley.

“Farmers lose money on those acres, which drags down the profit margins on the whole farm,” Crosby says.

NRCS has helped Burke County farmers enroll more than 5,000 acres in cost-sharing and incentive programs over the past four years to help them manage saline soils.

The land is either planted to less salt-sensitive grain crops or to a mix of perennial grasses, depending on the salt levels. As a result, four things are happening:

The first step is to figure out how to reduce the water flowing into the saline areas from surrounding hills and slopes, Crosby says. This might involve changing tillage systems and crop rotations.

No-tilling will reduce runoff by increasing the ability of the soil to absorb and hold water. 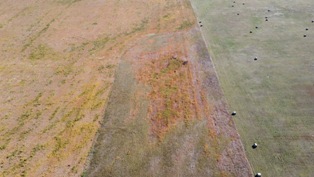 Changing the rotation to crops that use more water helps, too. Sunflowers, alfalfa and cover crops are good options.

The next step is to determine how “hot” the saline area is by soil testing. Soil with an Electrical Conductivity (EC) of less than 2.0 dS/m can be planted to crops that are somewhat salt tolerant. Best candidates include barley and sunflower.

Soils with an EC of 2.0 dS/m probably won’t grow any grain or oilseed crops. In those areas, it’s best to first kill the weeds, especially foxtail, and seed perennial grasses. Many grasses can grow in saline areas. They will lower water the table, which will draw down salts.

For Burke County, Crosby recommends a mixture of Canadian wild rye, western wheatgrass, slender wheatgrass, alfalfa, sweet clover and AC Saltlander green wheatgrass. AC Saltlander is an advanced-generation hybrid cross  between quackgrass and bluebunch wheatgrass. It has been one of the best grasses to plant on salt affected soils, Crosby says.  Most of the grasses in the mix are bunchgrasses, which root deeper than sod forming grasses, utilizing more salt affected water.

Dormant seeding the grass in November or December – often just before the first snow — has worked best, Crosby says.

Whether seeding a salt tolerant crop or the perennial grass mix, it’s best to plant a buffer around the edges of the saline area, too, to help stop the spread of the salinity, Crosby says.

Marshall Chrest, a Bowbells, N,D., farmer, has worked with NRCS to manage salinity. He has converted 50-75% of the saline areas on cropland they own to grass.

“It has really made a difference,” he says.

They no longer put expensive seed, herbicide or fertilizer on saline areas only to lose money on those acres. Instead, they produce hay on saline areas for their cow herd.

“It’s good forage, too, not junk like we were getting when it was just weeds,” Chrest says. The Environmental Quality Incentive Program that he is enrolled in allows the grasses to be harvested when the nutrient quality is still good.

He also appreciates the additional wildlife he sees in saline areas planted to the perennial grass mixture.

“We have been on the defense against salinity for a long time,” he says. “It was beating us up pretty bad. It’s nice to have another tool in the toolbox now.”

BOTTOM PHOTO:
Perennial grasses planted in a saline area between the soybean field on the left and the hay land on the right. (Photo: NRCS)